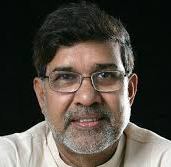 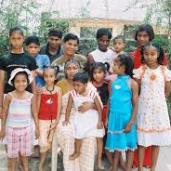 Kailash Satyarthi, Nobel laureate with Malala needs no introduction. Hes not a god but a father to hundreds of children who otherwise would have been condemned to a life where a life in hell would have been better than the life they were living and also a friend to those poor parents whose trafficked children were rescued and reunited with their parents. And todays world needs a father, a friend, a guide and a conscience more than a god or gods representative and Mr. Satyarthi is all those .

There is another person I had the fortune to personally know Ms. Anjina Rajgopal of Sai Sansthan, a mother to scores of chidren who otherwise would have been in  either orphanages or on the road. She did not marry so that her personal life would not interfere in taking care of the children that come to her. She not only raises orphans ( I woudn’t call them orphans as she is there for them) but loves them nurtures them their dreams teaches them skills to survive in this world  and also make a living and when they are ready, arranges their marriages like a parent does.

I am sure there are many more. What makes these people do what they do yet be so peaceful. For us raising 2 children is often stressful. Yet look at these people they are at so much peace with themselves that when you are in their presence you start to feel calm. I haven’t had the fortune to meet Mr. Satyarthi but seen his pictures. And Ms. Anjina, whenever I feel stressed I remember her face, her calm demeanour. There is always a welcome smile on her face even when the 30 odd children starting from ages few days are screaming their heads off playing or calling her “Mummy, Mummy” or watching TV. Ive never seen her tense or stressed even when sad. Yes Such people are my heroes .

When a donation is asked for construction of a temple crores of rupees are collected in a few hours to house a god’s image. But such people struggle to find funds to cater to the basic amenities not of themselves or their families but for Humanity to be kept alive.People like Mr. Kailash Satyarthi and Ms. Anjina Rajgopal show us what it means to be a Human and how the world can be made a better place to live. These people are the best example to demonstate the Power of One, that one person can make a world better and a whole system to change. Salutations to scores of such people around the world.